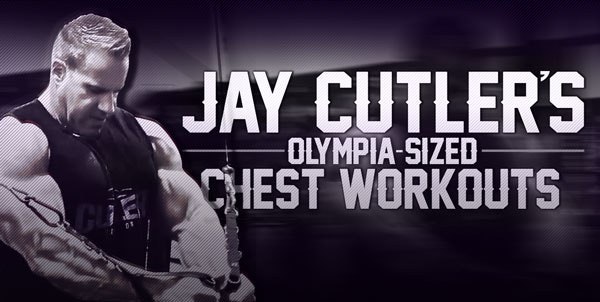 Jay Cutler, 4-time Mr. Olympia and 3-time Arnold Classic winner, stops by BPI Sports headquarters to train with the sports nutrition company’s co-founder James Grage. The main topic of conversation is all about building a massive chest of course. Jay’s chest is so big, he says he used to rest his chin on it when sleeping on planes when traveling.

In this video, Jay Cutler is sharing some of his training philosophy, and not just from a maintenance program perspective, but what he really does in the gym to build the upper chest. The former Mr. Olympia also shares his do’s and don’t’s, what bro science really means to him and general tips about form.

According to Jay, when you’re working out your chest, you want to make sure you’re always keeping that body part high. No curl over during your chest press workout, just have your chest out and contracted. You want to feel that peak contraction, not just push out the weight. Don’t lock your elbows and just get a good squeeze on the chest.

The trick to a good chest workout is to put your mind to the muscle, and visualize how it works… at least that’s how Jay does it. For him, a chest workout works from the bottom to the top. He has a plan of attack every time he walks in to the gym, visualizing every workout before he starts to train.

When asked about incline upper chest exercises, Jay believes there’s no way to really isolate only the upper chest muscle. For the former Mr. Olympia, angles are really how you build muscle, which is why you train with different movements. Work from the bottom up, as you build, and your chest won’t have a choice but to grow. When training his chest on a flat bench, the bar never touches his chest.

As far as cable crossovers, he prefers cable flys, which means he steps forward a bit, so his chest doesn’t curl over.

As far as bro science goes, Jay Cutler says he never followed what the academic science textbooks said on workouts. He learned from bodybuilders like Bob Paris, Frank Zane, Arnold Schwarzenegger and Chris Dickerson. He trains one body part every day, five times a week: three days on, one day off, two days on, one day off.

Jay Cutler is a partner of BPI Sports.