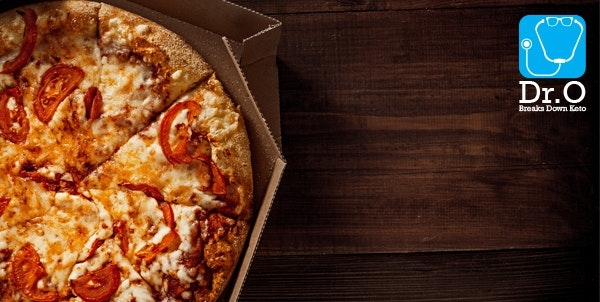 “Is a cheat day okay? The answer to your question is, if you are keto adapted. As I said before, that means that your cells essentially are running on ketones for fuel, as opposed to running on glucose, which is what the vast, vast, vast majority of Americans are running on, and therefore there’s all this disease here. The genesis of these metabolic diseases has to do with consumption of simple carbohydrates.

So if you are keto adapted, and you’ve done your requisite carbohydrate depletion for 8-12 weeks, I always call this the clamp. If you were to go and eat a very, very heavy, carbohydrate-laden meal, because of the fact that you have this “clamp” if you will, if you were to go and test your blood sugars, they’re not going to shoot up to the point where you believe they may have shot up. If an individual that were not keto adapted were to eat, for example, a Snickers bar, their blood sugars may shoot up to 200 transiently. This is what we see: the blood sugars go up transiently in a keto-adapted individual and then they’re clamped right down within an hour or two to that normal level.

Now, if you are an individual that is on the threshold of being in ketosis and you’re knocking your carbohydrates down – let’s say you started at 75, now you’re at 50 – and you go and eat a carbohydrate-laden meal? Yes, you’re going to have a problem. That is definitely going to delay your transition into ketosis, because what you’re doing is, you’re telling your body, “Hey! Up-regulate the enzymes that allow me to metabolize the carbohydrates because you know what? You’re feeding me carbohydrates!”

So that’s in stark contradiction to what happens in an individual who is keto adapted in whom cellular energy is derived from ketones and all of those enzymes are very much up-regulated and those that help allow our cells to metabolize glucose are down regulated. You don’t want to go and eat a very, very carbohydrate-laden cheat meal during your induction phase.

I would say, if you’re going to cheat, and a lot of us do – that’s fine, everybody’s human – make sure that you have done a fairly rigorous induction phase prior to going and cheating, because your body is not going to tolerate it and you’re going to take a step in the wrong direction. It’s like taking a step forward and then taking two steps backwards if you do it during that induction phase, so don’t do it! You’re trying to teach and coerce your body into using fats, or ketones, as a primary fuel source, as opposed to glucose.”