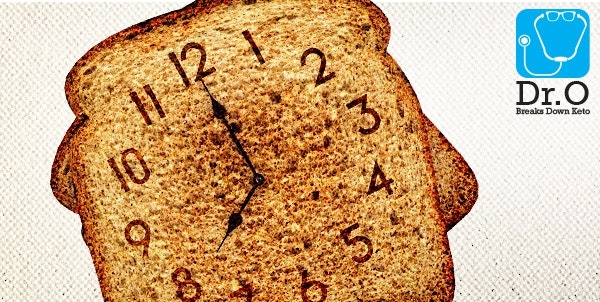 One of the ways that you’re going to induce ketosis faster on those days, even though it’s not the easiest to induce ketosis on a single day, is on the morning of your off day – say you trained heavy on Monday, you had a relatively high carbohydrate day – Tuesday, what you would do is you would go into the gym on some coffee, some MCT oil or use a Beta-Hydroxybutrate-based exogenous ketone product, then do your cardio, essentially on a fast. That is going to help you induce ketosis, even during that short 24-hour period, but by day’s end you may in fact be greater than .5 milimollars so that would be the way that you would do it and you’d just basically do a flip flop.

Yes, there are various other ways of doing this, of course. Bodybuilders tend to use these month-long bulking phases and then they go modified ketogenic – even if they don’t necessarily call it that – or fully ketogenic. So as an example, the days before the show, when they’re down to 10 or 15 or 0 grams of carbohydrates obviously at that point, they’re in ketosis and they’re fully ketogenic by virtue of their carbohydrate depletion. At that point, as we’re all well aware of (this is in the context of bodybuilding), the goal is to not lose muscle – that’s why they take a lot of BCAAs – but to shed any additional or unwanted body fat pre-contest.

So it’s fairly simple, it’s just whether or not an individual is actually going to meet the arbitrarily-defined standards of ketosis or the .5 millimolars during that 24-hour period of time. Quite frankly, it doesn’t really matter because if you’re having high-carbohydrate days on your training days and you are dropping off your carbohydrates precipitously during your days when you’re off – as an example, when you’re doing your cardio – you’re going to assuredly be in a fat-burning state. Particularly if on that heavy-carbohydrate day or that training day – say as an example on Monday – you’re not eating very late at night. Then you’re going to be coming off a long fast – say as an example from 8:00 at night until you train at 6:00 in the morning – so you have 10 hours-worth of fast during which time you’re going to be mobilizing fat stores.”