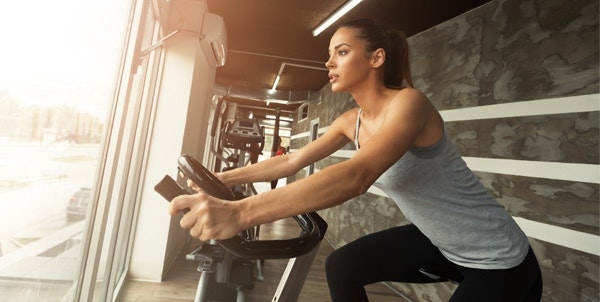 Cardio shouldn’t be called cardio. It’s a misnomer. “Cardio” is a four-letter word, as is “aerobics,” the exercise trend popularized in the 70s. It mortifies me to think that people are spending hours on end in gyms, immersed in “cardio,” spinning their wheels on stationary bikes, under the assumption that they are 1. training their hearts (ergo the name, “cardio”) and 2. shedding fat off their waistlines. How could all of these people be wrong?

Well, they’re not totally mistaken, but there is a much, much better way. Yes, unless you’re all about the social aspects of gym-going and by virtue fancy inefficiency, consider the smarter alternative: strength training. That’s right, lift weights instead. Spend not one minute more on the elliptical or treadmill. Why? Because you’ll reap greater cardiovascular benefits from strength training with short rest intervals. Yes, training your entire body in rapid sequence, moving quickly from one exercise to the next a la Nautilus founder Arthur Jones, will dramatically improve your cardiovascular function and reduce disease biomarkers. And you’ve killed two birds with one stone, instead of dedicating a separate day for that four-letter word.

Truth be told, “cardio” should never have been given that misleading label. Sure, one’s heart rate climbs during a training session, but that’s not a function of the heart unto itself. The heart is simply reacting to the oxygen extraction capacity (or lack thereof) of the skeletal muscles. Now read that again. Stated another way, the heart will beat faster in the less conditioned individual, in one whose skeletal muscle is less efficient at extracting oxygen from the blood. And the opposite is true as well. Logic would dictate, therefore, that improving the oxygen extraction capacity of the muscles would better cardiovascular status as defined by a lower resting heart rate, an improved tolerance to longer bouts of exercise and an enhanced fat-burning capacity.

So how does one accomplish this? Condition the muscles through intense exercise (until positive failure) with short rest intervals between movements. Your muscles. Your heart will react in kind as the muscles respond to the induced training stress. And in far shorter time than the many hours spent on the treadmill to induce a similar physiologic response. So consider ditching the “cardio” in favor of a once weekly high-intensity, full-body training session, Mentzer style. Yes, your heart will still thank you – and so will your physique.