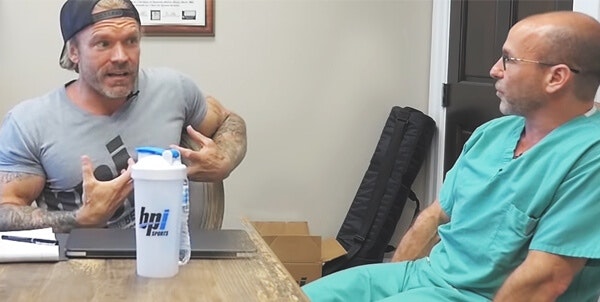 James Grage: Last time you and I spoke, we talked about ketogenic diets, we talked about a traditional keto diet vs. a modified keto diet, which kind of led into some different side conversations. Once I watched the video, I realized how many more things I wanted to talk about. Whitney and I were talking about it and Whitney’s probably dieted for photoshoots and bodybuilding competitions as much as I have. So I wanted to bring him here because there’s two ways we could look at this: there’s the medical perspective and then there’s the real-world perspective of losing body fat. Just doing it over and over and knowing how to do it. Whitney, at this point, if you knew you had 10+ weeks to get in shape, you know you could do it.

Whitney Reid: I’d be in shape in eight weeks.

James: It’s the same thing for me. It’s one thing to know how to do it, but you could explore potentially the best way to do it and also maybe what’s best in the long term. Like when we talked about the health benefits as well.

James: The main thing that I want to dive into first because I have some pet peeves about it: I still feel like there’s so much bullsh*t out there when it comes to ketogenic dieting. There’s so much bad information. People will take a little bit of truth and then it gets morphed and it changes into this weird thing. So people out there have weird ideas of what a ketogenic diet is or what the benefit of being in ketosis is. There are some things that I can’t even find. If I go on Google or if I go on PubMed, I can’t even find information. So I really just want to pick your brain. This is like the quest for the perfect diet. We’ve talked a lot about it before. Knowing guys like Whitney and I still like going to the gym, still want to be able to build lean muscle or preserve lean muscle and get lean at the same time. But now we’re at a point in our life where we also want to look at long-term health as well. We talked about comparing a low-carb diet where you’re in a low-insulin state, so your body is efficiently utilizing fat as a source of fuel but you’re not in ketosis versus being in ketosis where your body is still in this fat-burning state but your body is now producing ketones. Aside from fat loss, we talked about the benefits of ketones as a source of fuel for your brain, that being the primary benefit of ketones.

Dr. O: Right. There’s data on what are called the neuroprotective effects of ketones so we then believe that the onset and progression of diseases like Alzheimer’s is slowed by the presence of ketone bodies in your bloodstream.

James: So there are health benefits, but specific to weight loss – because I think that’s what most people are concerned about when they’re doing a ketogenic diet.

Dr. O: The thing about it then is that ketones are just a marker.

Whitney: To know you’re in ketosis.

Dr. O: Right. They don’t have anything to do with your fat loss. They are a marker that you are in a very, very accelerated fat-burning state. The quantity of ketones that you are producing is an indicator of how fast you are burning fat. That said, being in nutritional ketosis is just a marker that you are mobilizing fat in a very, very aggressive manner, more so than an individual who is on, say, a modified ketogenic diet, which James calls a low-carb diet. You’re not going to be purple on that urine stick. You’re not going to be three millimolars in. You may be .5 so you’ll be right on the edge, which is where I like my patients. Why? Because one of the problems with ketosis – and this is what I’ve seen and know to be true – is that when you are on a ketogenic diet, despite what people say, you tend to dump muscle. You just do. Even though there’s this muscle-sparing effect of ketones, the bottom line is that it’s not wholly true. When you look at someone who’s been on an aggressive ketogenic diet, you can see it. You just will. Hence, and by virtue of the fact that people are less energetic when they’re on a full ketogenic diet, and some of them tend to be miserable, we use a modified ketogenic diet in my clinic. Why? Because in my practice, I never want anybody to lose muscle. I want them to put on muscle, and I’m gonna tell you – putting on muscle in ketosis? It’s not happening. The only way it’s happening is if, at the same time, you’re using androgens.

James: But for the people who aren’t, which a lot of people aren’t…

Dr. O: For the people who aren’t, it’s just not gonna happen. You may maintain your muscle mass. You may. But in all likelihood, you’re gonna end up shedding muscle in that very, very catabolic state.

James: In order to be in ketosis, your body technically is in a starved state.

Dr. O: Correct. But again, what’s going in the literature now is that there’s this muscle-preserving, muscle-sparing effect of ketones.

James: But to what degree? There could be a small degree, but does that offset the amount of muscle loss through glycogenesis?

Dr. O: The answer to that is, not in my opinion. I will tell you, performance tends to falter a bit when you’re ketotic. Not to the extent that, for example, if you can deadlift 500 lbs. you’re now only going to be able to deadlift 250 lbs. It’s not going to be that drastic. But by virtue of the fact that you’ve lost some muscle, you’re going to lose some strength.

James: So you can be strong on a ketogenic diet, at least for a couple reps.

Dr. O: You absolutely can. It’s a different energy system. But if you’re talking about having the ability to keep doing the 8-10 reps fueled by a glycogenic state on a ketogenic diet, you will not be able to do it. You just won’t.

James: So then you have to modify your training. So for a powerlifter who trains in the rep scheme of two, three, four, five reps, it’s not gonna affect them at all. But if you’re training in 10, 12 or even 15 reps – I mean there are some times where I like to train in the 20-rep scheme – doing the ketogenic diet isn’t going to work for me.

James: So this goes back to my pet peeve. Again you read the comments on Reddit, or wherever and it says, “Being in a ketogenic diet, being in ketosis, has this muscle-sparing effect.” Maybe on paper that looks good, but that’s why I wanted to bring Whitney here. Guys like us have done it, fine tuned it and noticed the difference between this diet vs. this diet vs. this diet – I can see a dramatic difference. I’ve tried doing the keto diet and I saw the amount of lean muscle that I lost so if someone wants to say, “Okay, but there’s a muscle-sparing benefit over here.” I would ask what their ultimate goal is because if it’s fat loss, then maintaining lean muscle as your metabolic engine – your ability to burn calories – is more important.

Dr. O: It is. Hence we do it here at my clinic. I always tell people, “I don’t want you ever to sacrifice your engine.” In addition to the fact that all-cause mortality, including cancer, and independent of cardiovascular fitness, is directly associated with your strength. Don’t sacrifice strength, don’t sacrifice muscle mass. That’s why, in my clinic, we use a modified ketogenic diet.