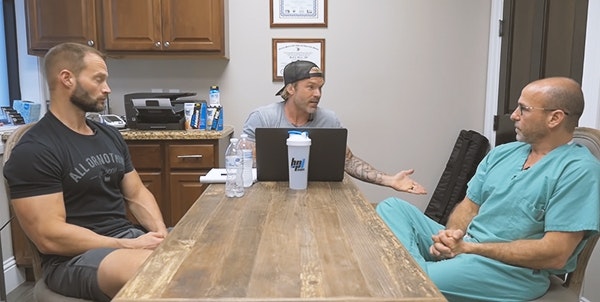 James Grage: I want to try and dispel this myth about ketones, because I think that’s where there’s a lot of confusion. People think that ketones themselves are some sort of magic fat-burning chemical. You see people online where a lot of the newer products out there have a lot of BHB in them, and I think they believe that the more ketones that they’re ingesting, the more that’s going to help them burn fat, which is not the case. Matter of fact, theoretically, you can burn less fat. Because if you’re taking in a certain amount of exogenous ketones, why would your body need to convert any more?

Dr. Brett Osborn: That’s true. That’s why I tell my patients, whether it’s eating olive oil, whether it’s using ketones, whatever it is, you induce the body to better burn fat or more efficiently burn fat, but that’s it. The bottom line is that you’re stoking those pathways so that when you’re sleeping, as an example, you’re going to be a more efficient fat burner. So I always tell people, eat fat, burn fat. But you can also say to somebody, “Eat ketones!” It’s going to further stoke the fat-burning pathways. The only difference between ketosis and being right on the edge of ketosis is that you’ve pushed the fat mobilization one degree further. But it’s nothing magic.

James: So here’s a distinction that I think people need to understand. I read a lot of things, especially about products that have exogenous ketones. Let’s say you slip on your diet and you consume too many bad carbohydrates. The products claim, “Go ahead and consume this and it’s going to put you right back into ketosis.” First of all, if you’re giving your body that source of ketones, which is just a source of energy, but you still have those carbohydrates, you can’t do it.

James: And here’s I think an even more important distinction that people need to understand: your body has to be in a fat-burning state before you can even be in true ketosis.

Dr. O: That’s the definition of nutritional ketosis. People think that when they drink a ton of exogenous ketones and then pee on a stick they’re in ketosis. You’re peeing out ketones, but you are definitely not in ketosis. You have to be very robustly burning fat. Ketosis is just the extreme. If you have depleted your carbohydrates for X number of hours and the liver glycogen is gone, that’s gonna be the signal for your body to start producing ketones. But if you have not been in that state for X number of hours, you are not going to be in ketosis just because you drank something.

James: Excuse the language, but it’s a total mind *$%& for people to take in a bunch of BHB, pee on a keto strip, and see ketones, despite the fact that they just ingested a lot of carbohydrates. You are not in ketosis. You’re tricking yourself.

Dr. O: You’re falsifying the test and tricking yourself.