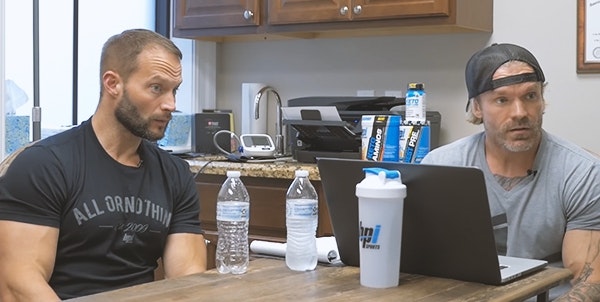 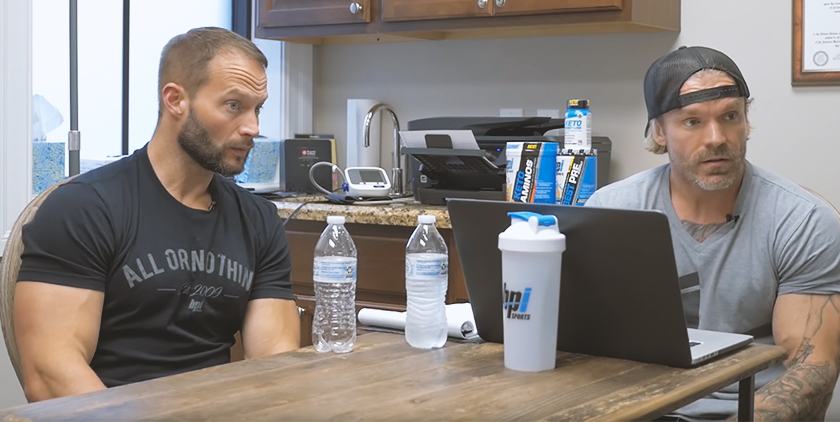 James Grage: Knowing that if we want to be leaner, especially if we want to maintain it – I think that’s the biggest thing for guys like Whitney and I – it’s not just getting lean, it’s finding something sustainable.

Whitney Reid: It’s the longevity that we talked about.

Dr. Brett Osborn: As an example, if you’re a bodybuilder, it’s that push-pull. As you’re coming in, 16 weeks out or 12 weeks out, you are trying to figure out how to maintain that muscle, but at the same time, lose the body fat.

Dr. O: No. That sort of doesn’t make any sense, right? You’re anabolic, you’re catabolic. This is a weird line that everyone is trying to walk.

Dr. O: Right. That’s what we’re trying to do here in this clinic. We’re trying to maximize the muscle mass, the strength, the performance – without getting injured – and at the same time, keep your body fat low. And the way that we do it here, well we have those tweaks that we talked about, some of which are medicinal, not stimulants. The way that we do it here is that we move slowly. People come here, and they have these preconceived notions that this is a fat-loss clinic. No, it isn’t. And then they’re disappointed. “How much fat loss can you expect?” they ask me. “Am I gonna lose 20 lbs. in two days?” Come on. No. I want them to move very slowly. When people’s hormones are optimized, when they’re on metformin, when they’re training right, when they’re eating properly on the protocol – modified ketogenic – they’re not dumping a lot of muscle. Hopefully they don’t dump any muscle. And they’re just in a nice fat-burning state, but it’s not ketosis. We can usually tell a male that he’ll lose a pound to a pound and a half of fat a week. And that’s what we see. That’s based upon thousands of patients. That’s beyond anecdote. A woman who’s less metabolically efficient if you will because they typically run around with less muscle. Typically. She can lose about three-quarters to a pound of fat per week if she does exactly what she’s told to do. And that’s the safe way to do it because it’s slow. We don’t reduce any calories here. Why? Because you lose muscle. And when you lose muscle, you lose your fat-burning capacity. All we do is run a macronutrient diet that is run isocaloric to their BMR. Where do we get their BMR? The scale. It’s a very accurate scale. So that’s how we do it here. We tread slowly. I don’t give people any extra because they’re a bodybuilder and they want to put on all this muscle. Nope.

Whitney: That’s sustainable, too. And if you tell someone that they’re going to lose a pound of fat a week, that’s a lot!

Dr. O: People don’t realize that. They want 20 lbs. They want the commercialized fat loss, but what they don’t realize is that they’re shooting themselves in the foot because they’re losing muscle.

Dr. O: Yes, that is correct. In a classic keto diet, as you know, 70-75% of your calories are from fat. In our protocol here, we’re a little bit more liberal with the carbohydrates. If you were to look at it, it’s somewhere between 50-55%.

James: You and I talked about it. Even with this product, Keto Aminos™. The fact that it has the essential amino acids in there and amino acids can take you out of ketosis.

James: And that’s my point. So here’s my question. If you’re only following a high-fat diet because too much protein along with your fat will take you out of ketosis…

James: Your body is going to convert those proteins, those amino acids into glucose.

Dr. O: And you’re going to have an insulin spike.

James: But if we don’t necessarily care about being in ketosis, because ketosis isn’t necessarily the marker for fat loss, as long as your insulin levels remain low, then why not bring in a little bit more protein to make up those calories. Cuz as we’re trying to get our total, daily calories, if carbohydrates are low then that means we have to bump something else up. Well, people never bumped up their protein because it would take them out of ketosis. So then it was high fat. But if we don’t care about ketosis, why not bring the fats down a little and the protein up a little?

Dr. O: That’s a good question. There are people who can’t tolerate those fat loads.

James: I can’t. I mean I just feel awful. My body feels gross.

Dr. O: Right and there are a lot of people like that. Or on Facebook, people will say, “I don’t have a gallbladder.” That doesn’t mean you’re not producing bio acids and things like that, they’re just not sitting in a bag and they’re not dumped as rapidly. You can still do keto if that’s what you want to do. Or you can use digestive enzymes. We can always spread the fats out throughout the day, etc., etc. But your point’s well taken. You can absolutely do that. But if you’re only barometer for fat loss is what’s going on on that pee stick, you’ve got a problem. Ketosis really doesn’t matter. It’s just a marker. You’re still burning fat.

James: And it can be a false marker.

Dr. O: Right. Transiently you might get knocked out of ketosis. So what? You’re still gonna be burning fat robustly as long as that insulin level is low. And it will stay low even if you’re using a product with amino acids. There’s gonna be a little bump, but so what? Typically that’s not gonna curb your fat loss significantly, if at all.