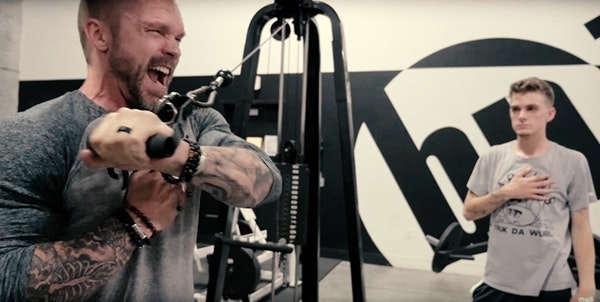 In Episode 3 of Games to Gains, we continue following Kerby Fortner during his first week of training ever! Follow along as the co-founder of BPI Sports, James Grage, coaches him as he tries to put on muscle:

After our first day of training, which just so happened to be leg day, the big question was, did Kerby survive? That day, as soon as I got home, I picked up the phone and called him.

Kerby: Hey, James, how you doing?

James: The question is, how are you doing?

I knew he lived on the second story of his apartment building, so I knew that was going to be a struggle for him making it up those in the afternoon.

The next workout is shoulders. In order to keep the workout to an hour, we did supersets. I like to use a combination of cables and dumbbells for shoulders. Be sure to start light. I think that’s one of the biggest mistakes people make with shoulders, is trying to go too heavy.

A lot of people, when they do shoulder presses, they’ll sit on a bench, put their feet up and lean back. As soon as you lean back, you start using more chest. Be sure to sit upright on the end of the bench. This will force you to stabilize your core. Press straight up.

“He’s hanging in there, he’s doing a good job. His body is just weak. His whole body’s weak,” James says. “There’s not being strong and then there’s weak. He doesn’t have very good body control. A lot of this isn’t just strength, it’s coordination. In the beginning, he’s going to have to build up his coordination. Then, I think he’s gonna see a dramatic jump in strength.”

Watch the full episode above to find out James’ plan to accelerate this process and help Kerby build a solid foundation of coordination.