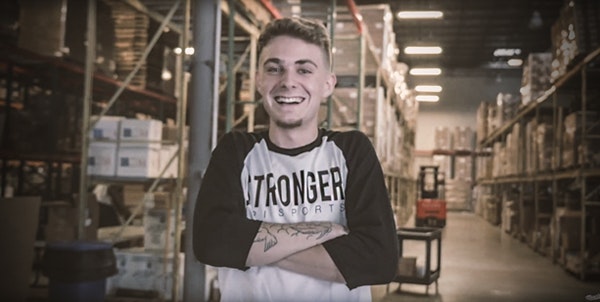 Alright, we admit it, we teased you a bit last week by telling you that you’d find out if Kerby had put on any weight. But this week on Games to Gains, you really do get to watch Kerby step on the scale to weigh in!

James Grage: Today is the big day!
Kerby: It is.
James: You excited? You nervous?
Kerby: Ya, I’m a little bit nervous. But I’m confident I’ve gained weight cuz I’ve been doing what I’m supposed to be doing.
James: I’m nervous too! I don’t have huge expectations because, I told you, this first month wasn’t about just gaining weight, it was about building a foundation, it was about starting to build these new habits, getting your coordination up… and you’ve done that. So just so you know, no matter what the scale says right now, I’m already happy. With that being said, I’m still curious.

James recognizes that although he’s been able to see the progress Kerby has made in the gym, a lot of the weight gain will be dependent on the nutrition side of Kerby’s approach – which James can’t see. He can’t be with him 24/7, so he’s not sure whether or not Kerby has been getting his meals in and taking his supplements. As confident as he was, he was still nervous about Kerby stepping on the scale to weigh in.

After starting at 132 pounds, James hopes that Kerby has managed to put six pounds on for a total of 138. Kerby is a little bit less optimistic, and thinks he’s only put on five pounds. Will they be pleased with the number on the scale? Or disappointed?

Kerby steps on the scale… and it reads 145! That’s 13 pounds in just three months!