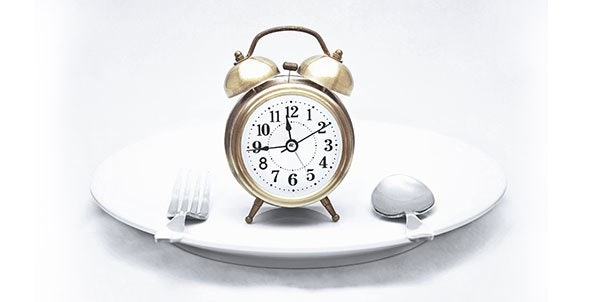 “Let’s talk intermittent fasting for a second and then discuss the interplay between both of these entities. Intermittent fasting, a variation of Ori Hofmekler’s Warrior Diet, popularized more than 20 years ago (despite claims that it is actually “new science”), is founded on once or twice daily feedings punctuated by long periods of fasting (18 hours daily or thereabouts). This is thought to emulate our primitive eating habits that were sporadic, and in short bursts, as dictated by the food supply. If we killed, we ate. Else we fasted.

It is speculated, by virtue of such patterned, intermittent feedings, unlike the grazing style of modern man, that disease incidence was lower and that absent infection, human life expectancy would have exceeded that of today. Why? This likely has to do with lowered insulin signaling because let’s face it, diseases of modern man are the result of metabolic dysregulation due to overconsumption of carbohydrates, the resultant insulin resistance and heightened bodily inflammation: accelerants of the aging process. So there certainly is merit to this philosophy, at least as an isolated dietary modality.

Personally, I have an issue combining intermittent fasting with a ketogenic diet. Why? Metabolic slowdown. Sure, one can make the case for the on switching of tumor suppressor genes in the fasted state, however, I am equally as concerned about the potential loss of muscle mass when these two modalities are combined. It is very difficult to maintain muscle on an intermittent fasting regimen to begin with, because the fasted state (particularly in the context of depleted glycogen stores) induces muscle catabolism for gluconeogenesis. Yes, ketones have anti-catabolic effects, however they tend to be overridden by bodily demands, one of which is strength training. This only adds stress to the already-stressed system.

One must eat to maintain muscle mass (and therefore metabolism), bottom line. In fact, eating is one of the best ways to augment basal metabolic rate, so why deprive your body of food for eighteen hours daily and then potentially risk the detriments of overfeeding during the six remaining hours? Let’s face it: most will only consume one meal during this period, and I have to question the body’s ability to process a day’s worth of calories (and particularly protein) at a single sitting, let alone quench the free radical onslaught.

My point? If you are considering a classic ketogenic diet, skip the intermittent fasting, at least on a daily basis. Ever hear the saying, “Too much of a good thing?” Likely you’ll end up shedding excessive amounts of muscle while concomitantly putting the brakes on your metabolism. Not good! Remember, your resistance to disease, to a great degree, is a function of your skeletal muscle mass. So maintain it at all costs. If however, you are convinced that the cancer preventive effects of the fasted state are warranted, incorporate a 24-hour fast every 7-10 days. I do. Else eat up.”