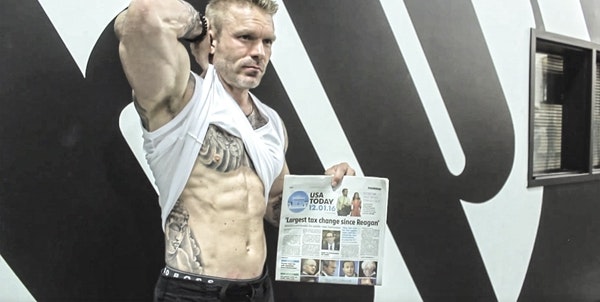 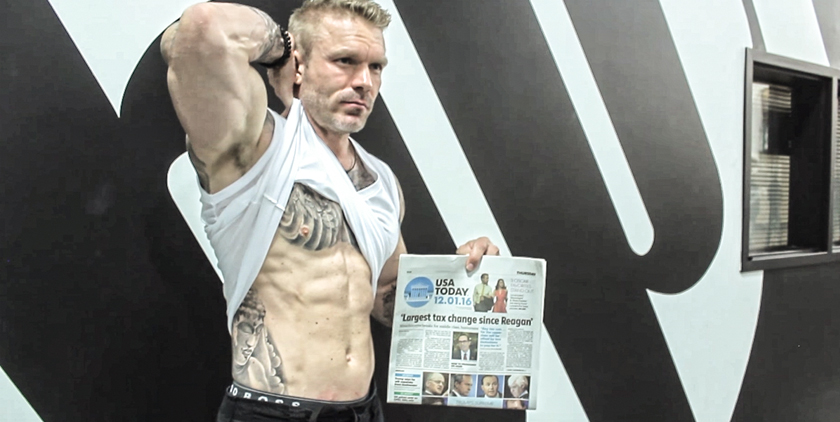 Last week, James Grage made the official decision to compete in the Arnold. Now he has 12 weeks to get in the best shape of his life. Where will he start?

James: Here we go. Day 1. I’m going to jet up to BPI, hop on and do some cardio first thing in the morning. I haven’t done any cardio… man, it’s been a long time.

After 40 minutes and about 450 calories on the elliptical, James drops off his application in the warehouse to make sure it gets shipped out. Then it’s time for breakfast.

Mike T: What’s up with you man? I heard you were in here this morning early getting it in.
James: Told ya. It’s day one. I’m not messing around. The only thing that I haven’t done yet is my body fat. So right now I’m just guessing on my nutrition. I weighed myself this morning…
Mike T: What’d you weigh?
James: I weigh 185.8 lbs.

Cardio isn’t the only training James is doing to prepare for the Arnold. He’ll also have to amp up the intensity on his weight lifting.

James: It’s time to hit the gym and today is back day. I’ve got some pretty specific goals for myself over the next 12 weeks when it comes to my training and back is one of them.

Mike T: It’s definitely cool that he decided to do this after so long. He’s been in the game for so long. He competed maybe 12 years ago and to step back in the game after a while, it’s admirable, especially considering all the other stuff he’s got going on. He does it all.
Kerby: He edits, he records, he’s the boss man…
Mike T: He’s a man of many hats, I say it all the time. He’s a video guy, he’s a camera man, he’s an editor, worker, family guy, all that good stuff. I’m proud of him. I hope he goes all the way. As a matter of fact, I think he’s gonna go all the way with it. I think he’s gonna get first place at the Arnold. You heard it here first!

Find out where James’ drive to be the best comes from. Watch the full episode above and tune in every week for the next episode of Mission Shred.