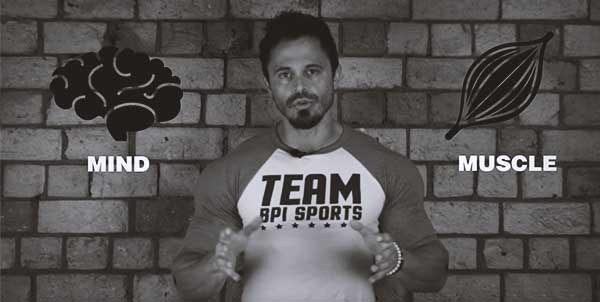 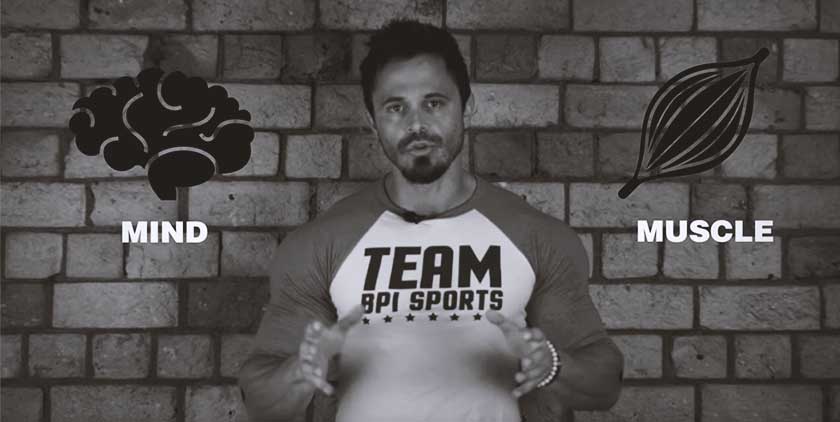 This week, Tyrone Bell explains the importance of mind-muscle connection.

What is Mind-Muscle Connection?

Movement is controlled by the brain. The first step in a muscle contraction is a signal, sent from your brain to your muscles, with the instructions for them to contract. The actual mind-muscle connection occurs at the neuromuscular junction. This is where the mind basically meets the body. The brain releases a chemical neurotransmitter, acetylcholine, to communicate with the muscles. When this is released, it crosses the synapses, the tiny spaces that separate nerves from muscles. There, it binds to receptors on the surface of the muscle fibers and boom! We have a muscular contraction.

The more you can improve this communication, the more you can strengthen the signal from your brain, across the synapses, to the muscle, the more muscle fibers you will recruit when you perform a lift. This results in a better, more concentrated, more quality muscle contraction.

When we’re lifting with the goal of structural muscular change, I strongly believe we should have one primary target muscle in our scopes when performing an exercise. Even on compound exercises, where multiple muscle groups are in play, we should be trying to ensure that the greatest percentage of load is being placed on the target muscle throughout the range of movement. This is where people who have established strong mind-muscle connections have a great advantage. Being able to keep the signal of muscle contraction mainly in the target muscle means more targeted muscle activation and, in turn, more hypertrophy.

Now, the reason the mind-muscle connection concept has stayed classified as “bro science” is because, up until now, there hasn’t been a long-term study that has measured mind-muscle connection in its relation to its ability to increase hypertrophy. Exercise academics and scientific data as a whole, haven’t really given much love to the concept of mind-muscle connection. Until recently, most academic thinking was on the importance of concentration on external cueing, reasoning that the muscles involved in the lift automatically fire to successfully complete the movement. They assumed that internal cueing holds very little benefit.

In a 2012 study, however, that put mind-muscle connection on the map and led academics to start questioning their viewpoint. This study used EMG readings, measuring the pectoral activation during the bench press exercise. They measured how much more activation and muscle fiber recruitment was present when the subjects were actively concentrating on their pectoral muscles firing and contracting through the entire range of movement (as opposed to just moving the weight from point A to point B).

The results? EMG activation increased by up to 22%. Now, where the study fell short and therefore couldn’t launch the concept of mind-muscle connection into the mainstream, was that the study was not long-term. Long-term hypertrophy effects couldn’t be measured to establish if there were any. In addition, the 22% increase in muscle activation was only present in the lighter weights. Once subjects started getting into 80% of their max lift, regardless of all internal, mind-muscle cueing, there was very little difference.

Now, moving on to a more recent study that has made academics give mind-muscle connection some scientific credibility. A 2018 study worked with participants for eight weeks, using a specific, hypertrophy-based training program. The emphasis of the study was requiring the participants to place full concentration and internal focus on each and every rep that they performed, each and every workout. Another test group of lifters in the same study purely concentrated on moving the weight from point A to point B in each exercise. At the end of the eight weeks, muscle thickness in the biceps and quads was measured via ultrasound. A difference of about 5% growth was present in the biceps of the lifters who put an emphasis on mind-muscle connection. However, the quadriceps growth was pretty much the same across the board.

One of the most common reasons people fail to establish a mind-muscle connection is because they’re obsessed with pushing more and more weight. Now, I’m not about to stand here and say, ‘Lift light.’ I do believe in lifting as heavy as you can, but only while you still feel the load in the primary targeted muscle. Each and every rep also needs to be good form. Once you lose the connection and start to lose the load from the primary targeted muscle, the lift should be over. Rest and either attempt the lift again with less reps or pick a lighter weight.

One of the best things you can do to improve your mind-muscle connection is activate your target muscles as part of your warm up. I require all of my online clients to perform pre-workout activation movements designed specifically for each of them. These movements and sequences help turn on and prime their targeted muscles to be ready for the coming workload. These activations are a combination of both isometric contractions and movements that place the targeted muscles in the shortest contracted point under slowly intensifying moves.

Another thing to incorporate is flexing your targeted muscles throughout your workout session. Flexing forces additional blood flow to your target muscle, helping you further increase your localized pump. Pumped muscles are easier to feel and therefore isolate through movements. Be careful where you actually use these intra-workout flexes though. You don’t want to fatigue yourself at critical stages of your workout. I’ll actually recommend specific points in my clients’ workouts where I know an intra-workout flex will be beneficial and boost their mind-muscle connection without compromising their workout performance.