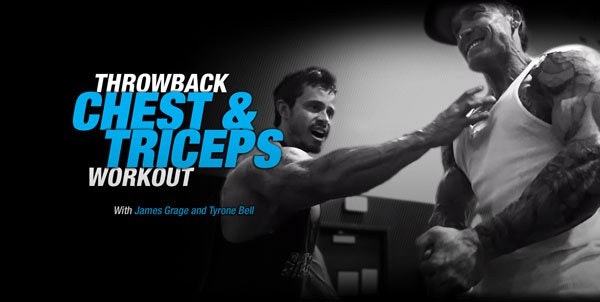 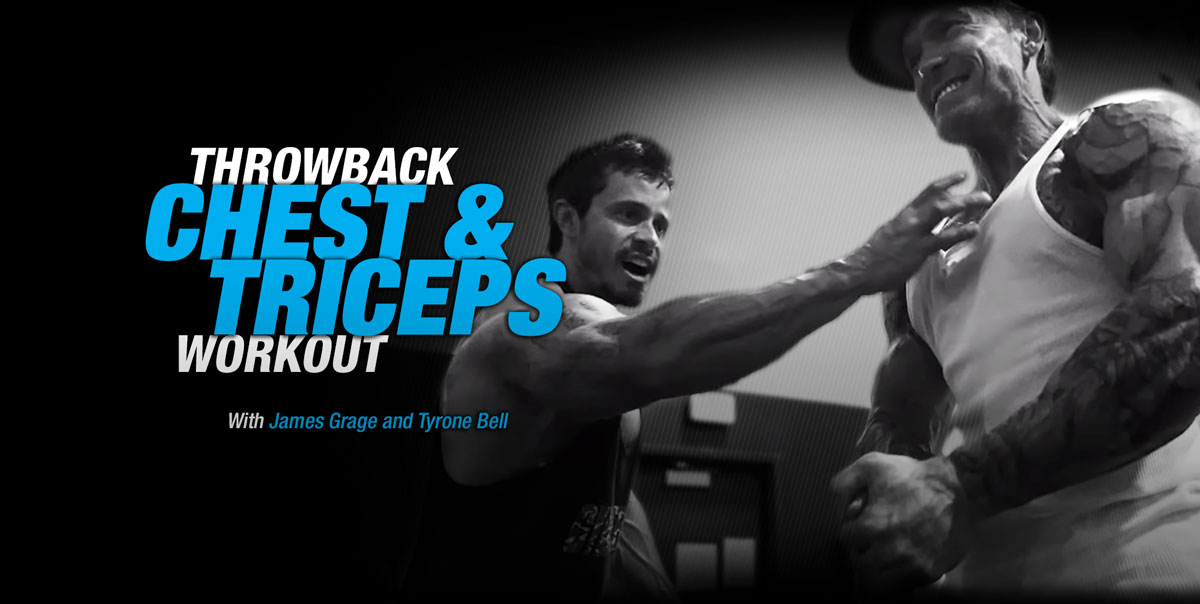 When James Grage, co-founder of BPI Sports had a workout throw-down in the gym with celebrity trainer and founder of Legion Training, Tyrone Bell, we had to capture it on film. Watch as these two powerhouse physiques train chest and triceps in this throwback style workout.

After multiple conversations about training philosophies and alternative exercises between co-founder/VP of BPI Sports, James Grage, and BPI Athlete/Founder of Legion Training, Tyrone Bell, we decided to invade James and Tyrone’s Chest and Triceps workout to see what all this talk was about. James and Tyrone explained that they have similar personal approaches to training – full muscle fiber profile stimulation, triggering different hypertrophy effects, and above all else – leaving the ego at home and always maintaining the mind set of form over weight every time. Finally, it was time to put it into play with a beat down of a session – a tit-for-tat workout, and we caught it all on film.

“A tit-for-tat workout is a great way to experience different exercises, movements, and muscle stimulus that you may not have experienced or done before. I was aware that James and I had very similar outlooks on training so although there were going to be different exercises that we would throw at each other, I knew the training ranges and principles would complement each other and produce a hell of a session. And it did not fail to deliver!” – Tyrone Bell

The rationale here is to utilize characteristics of both a compound (incline DB press) and isolation movement (incline DB flyes) to trigger the chest for better overall development through a unique plane of movement. Utilizing the DB Flye movement through the eccentric phase of the lift ends up putting the dumbbells in a wider than normal position for when we then turn and press them through the concentric phase to return them again to the starting position. This helps recruit more of the upper chest’s inner fibers as we press the dumbbells from the wider than normal position up together again.

I’ve nicknamed this the ‘Dumbbell Glue Press’ because the key to making this work the way it needs to, is to keep the dumbbells stuck together ‘like glue’ throughout the entire movement. During both the eccentric phase and the concentric phase the dumbbells need to be not only ‘stick together’ but be continually and firmly forced together. This is going to hugely increase the recruitment percentage of muscle fibers throughout every inch of the movement. Each and every set should be immediately finished off by standing and performing a 5-6 second isometric squeeze. This 5-6 second ‘pose down’ serves to help further the muscle truma hypertrophy effect as well as strengthen the neuro-muscular pathway between the targeted region of the pecs and the mind – giving us again a better percentage of muscle fiber recruitment for the set that follows.

This exercise combo is really about inducing the muscle cell swelling hypertrophy effect through the targeted area along with triggering a level of metabolic damage that occurs due to the sheer volume of each set and the minimal rest between the sets. We achieve this by coming close to failure on 10 reps of Cable Flyes, followed by performing 6 reps of partials to bring the pec to failure, then calling in the assisting muscle groups (Triceps & Front Delts) to help take the fatigued pecs well beyond failure to perform 10 Cable Presses. Keep your hands open on the flyes from the start. Doing this will give you an inch or inch and half extra contraction, calling in more fiber recruitment for ultimately more chest development potential.

This exercise varies from your standard Ez-Bar Flat Bench Skull Crusher movement in that it places a new angle, increased time under tension and an isometric forced contraction factor into play all at once. The first key to making this exercise work successfully is the position of the extended arms. By having your arms extended the targeted Triceps are placed under stress throughout the entire exercise, hugely increasing the time under tension. To ‘up’ the intensity of this movement even further, purposefully and vividly visualize yourself forcing your hands to try and ‘tear’ the bar apart throughout every inch of the movement. This will induce a muscle trauma effect like you haven’t felt quite before.

Think of Dumbbell Kick Backs. Now think of yourself performing them with any possibility of cheating completely removed. Traditional Dumbbell Kickbacks are a great exercise for the Triceps but all too often as we fatigue so does our form and consequently so does the targeted stimulus. Lying face down on an incline bench removes the possibility of any ‘swinging’ assistance. Concentrating on keeping your arms high and parallel to the floor and searching for the ‘squeeze’ on every rep is going to have the load exactly where you want it each and every rep. Do be prepared for the ego to take a hit here though – lighter than normal weight will have to be used to be able to execute the movement and achieve the full stimulus effect.

The Dumbbell Tate Press is a unique movement and one that is often under-used by lifters of today. Why? Primarily because the unique plane of movement often requires a lighter weight to execute properly. This very fact makes it a perfect fit for today’s session because that’s EXACTLY what today’s session is all about – FORM OVER WEIGHT. Performing 12 ‘perfect form’ Tate Press reps, then moving immediately into Close Grip Squeeze Presses takes the Triceps from a unique and fresh movement that its still trying to ‘work out’ into a viscous forced contraction movement because of the continuous squeeze that you’re inflicting by forcing the dumbbells together throughout every inch of the press. Good luck being able to contract your Triceps at all after this last Triceps focused exercise!

If you have anything at all left in the tank, this is where it gets fully emptied. 5 reps of close hand placement Press Ups to hit the Triceps with the primary load,then immediately widen the hand placement to perform 5 reps placing the Chest as the primary load. Without pausing keep repeating the 5 reps of close hand placement, then the 5 wide and so on and so on, until you basically collapse and have absolutely nothing left to perform another single repetition. This is the final burst to fill the already fatigued Chest and Triceps with as much lactic acid as possible inducing as much metabolic stress as we can.

Tyrone Bell is a member of Team BPI Sports.

The Titan Tells All: Mike O’Hearn Spills His Secrets to Success

The Titan Mike O’Hearn shares his tips and tricks on getting to the top and staying there....
Read More

Get your arms in peak condition and join Mike O'Hearn and Joseph Baena for a full arm workout....
Read More

Join us for week two of Dropping the Quarantine 15 as Steven Cao busts some of the most common 6-pack myths and shows you his fa...
Read More

Skip the long lines at your local Kentucky-based chicken chain and whip up some keto-style fried chicken from the comfort of you...
Read More

Post-Quarantine Checklist: 4 Things You Should Never Leave the House Without

Ready to get back to life before lockdown? Use this checklist to make sure you have everything you need to stay safe and healthy...
Read More