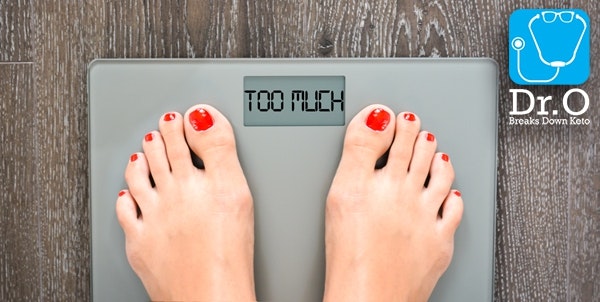 “As far as the induction phase, yes, you can be too aggressive and you can have a tremendous amount of lull or lag if you try to induce ketosis too quickly. It all depends on an individual’s tolerance, like anything else. So I usually induce my patients slowly into this modified ketogenic diet, but the same applies for a ketogenic diet. You would want to restrict carbohydrates in a decremental fashion, over a week, over 10 days, even longer than that, depending on your tolerance, and ultimately get down to your goal of 20-25g of carbohydrates per day. It would be too aggressive or too much if you did it any faster or you were intolerant to it.

That factor is one of the main reasons why people quit – the high attrition rate with going keto. Individuals tend to fall off when they experience that lull. That lull has to do with the fact that the metabolism is shifting over from one that normally uses glucose and carbohydrates to one that is reliant on primarily fats as a fuel source. What you have to do to avoid that problem is just go really, really slow and slowly induce the biochemical pathways that allow you to better use fat, as opposed to using sugar or glucose as an energy source.

The other thing that falls into that category of being too much in the context of keto, is what I alluded to earlier, which is the potential muscle loss while an individual is on a ketogenic diet, or even on a modified ketogenic diet. Pay close attention to this – you can lose muscle while you’re on a ketogenic diet even though ketones themselves have anti-catabolic effects. If you know people that wanted to lose a lot of body fat – this is outside the realm of bodybuilding – if you know someone who went on a ketogenic diet because they were morbidly obese, a lot of times when you see them at a later date, say six months later, they’ve lost not only a lot of fat, but they’ve also lost a lot of muscle.

You have to be very, very careful about being too aggressive during your carbohydrate restriction. Whether that means getting on an InBody scale, or using calipers or getting a DEXA study and working the math and figuring out what your skeletal muscle mass is, it would be worthwhile to do something like that because there’s a tendency to shed muscle. So you may find that the “sweet spot” for you is, instead of 25g of carbohydrates a day, you may be in ketosis (.5 millimolars or slightly greater) if you’re running at 50g of carbohydrates a day. And some people can stay in ketosis at 50g, and they’re shedding fat but they’re not shedding as much muscle because their insulin signal is slightly higher by virtue of the higher carbohydrate load. The other thing that you can do to temper this a little bit, is take your BCAAs and those have anti-catabolic effects.

So yes, people can go to extremes and go to 5g of carbohydrates a day, but I can assure you that if that happens, outside of any other factors, you’re going to end up losing a significant amount of muscle mass over time. You have to be careful. Do something, intervene, then recheck. Make a little modification, then recheck. That’s what we do in my office, it’s the exact same thing. We have a scale and I can tell whether someone is shedding muscle vs. shedding fat. So it’s very, very important that if you don’t have a scale in your home like that, and a lot of these scales are not so great, go to a physician that has access to a scale like that or go get a DEXA study and they’ll be able to tell you your body fat percentage and skeletal muscle mass.”