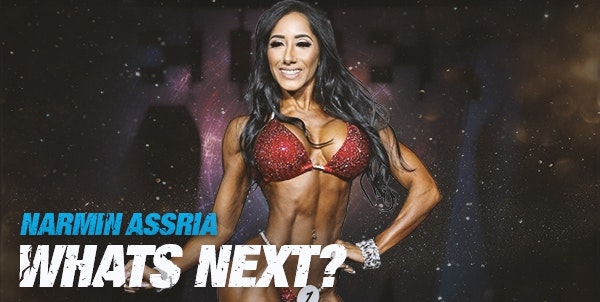 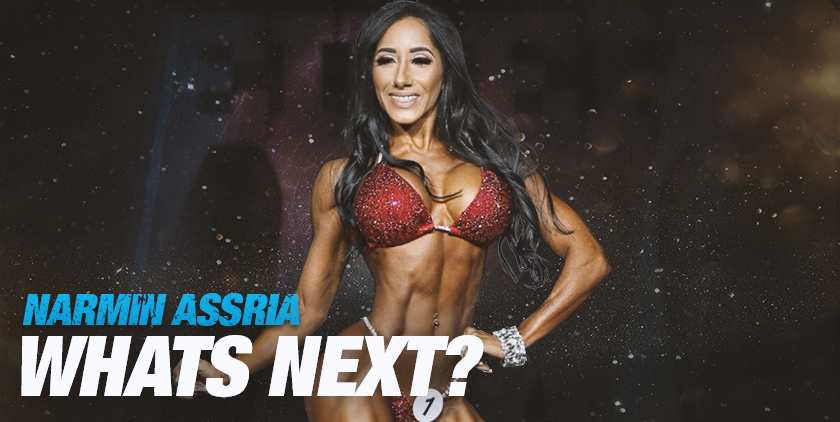 We sat down with Team BPI Athlete, Narmin Assria to hear about her life after the Olympia.

BPI: This year you competed at your eighth Olympia.

BPI: This year the qualification process changed a little bit, but that didn’t affect you, right?

Narmin: No, not for this Olympia. Since I placed top five at last year’s Olympia, I was requalified. So I was able to just jump back into the Olympia. But if you don’t win the Olympia or place top five, you have to qualify. Back in August I did that show in Portland and that was actually the first show that you could get points to qualify for next year’s Olympia. So I jumped into the Portland show, I got points there, and then I did the San Diego show a week and a half later I believe. I won that one, so I got points there. Then I did Sacramento, but unfortunately, I placed sixth there and didn’t get points because only the top five get points towards the Olympia. Then I didn’t place top five at the Olympia, so I still have to sit there and battle it out.

BPI: How many more shows do you think you’re going to have to do this upcoming year to get to next year’s Olympia?

Narmin: I’m doing the Dominican Republic show next weekend and if I win that, I’ll have sixteen points. Just to be safe, I would probably do maybe one more show next year? Then I’d try to go to the Arnold in Australia and build some points there. But I’m going to try and get it out of the way at the beginning of the year, that way I don’t have to wear myself out going into the Olympia and come in too small. I feel like doing so many shows back-to-back before the Olympia kind of ruined it for me. I came in really small and tight and I didn’t keep my fullness. That’s what the judges’ feedback was. I needed to eat. So my goal is to get it out of the way in the beginning of the year. That way I can sit out and put on some size for three months and then start cutting for Olympia.

BPI: So if you had to change something about this year’s prep, you probably would’ve changed your training and eaten more to make sure you came in bigger?

Narmin: It’s something my coach probably should’ve done. Maybe fed me a little more going into the show knowing that I was so small and I needed to pop. It’s just little tweaks here and there. Just the way I ate or what I could’ve done leading up to the show and I just didn’t. It’s hit and miss. You gotta take chances with your physique. You never know what your body is going to do. That’s why taking chances two to three weeks leading up to the show when you’re already ready… give yourself those cheat meals, give yourself the high-carb day and see how your body reacts. You never know what can happen. I feel like I didn’t really do that, so I didn’t take that chance in peak week or even the day before. I could’ve had pancakes! It would’ve made me pop the next day, and I could’ve easily looked the size I needed to.

BPI: How does the feedback from the judges work? Do you have a close enough relationship where you can go and ask? Is it more formal?

Narmin: At the Olympia, that Saturday night we have the gala dinner and usually all the judges are there. Everyone that’s involved in the industry goes to this gala. It’s mandatory. I saw Steve Weinberger there and I said, “What happened?” And he told me, “You are so small. You need to eat.” And then I got the same thing from Sandy Williamson. “You’re too small, you need to eat. I can see striations in your legs when you’re walking.” They want to see fullness. I do come in really lean and conditioned, but I think I came in too conditioned. I didn’t make my body pop more and that’s where I feel like my coach and I don’t mix. It’s hard. It’s so hard sometimes. You try to play the game. You try to make them happy and do what they want.

BPI: And unlike most competitors, you’ve never had trouble getting lean, right?

BPI: Do you think you’re going to stay with your same coach for this upcoming year?

Narmin: That’s the hard part. I’ve been with Kim since 2010. I’ve been with him since I turned pro, so he knows my physique but it’s just… I feel like my physique has changed so drastically this past year that we kind of stuck to what we’ve been doing and it didn’t work. So now that my body is so different, I feel like we need to start taking chances. That’s something that we need to discuss. I’m gonna stick with him. I want him to understand my situation, of course, but also, I need more guidance. I need more of a one-on-one type relationship. But Kim’s got so many girls that compete with him. I mean, I think he had 12 girls on the Olympia stage? So it’s tough. It’s tough being with someone that has some of the best. It has its pros and cons.

BPI: Do you have the same goal in mind every time you go to the Olympia? Or do you feel like that goal changes depending on the year?

Narmin: This year my goal was to place better than top five because I placed fifth last year. Every year I’ve been placing better and better, so my goal was to place fourth. I didn’t want to place fifth or anything higher than fourth. I wanted to keep it going. But unfortunately, that didn’t happen. I always want to enjoy myself and the experience, too. At the end of the day, that is the best of the best in the world. I get to step up on that stage. It’s an amazing opportunity and truly a blessing to even be able to compete there. All the girls are working so hard and I’m just really thankful for even being there.

BPI: Now you didn’t just compete at the Olympia this year. You also helped out with our booth. What can you tell us about that experience?

Narmin: Oh that was so much fun! I competed Friday and then Saturday we had to compete again, so I was exhausted, but I had so much fun doing it. I put on a little booty workout with all of my challenge winners and it was so much fun. Everyone just got involved, everyone was so excited about it… I had a blast with everyone. And I kicked their butts! I got so much feedback afterwards from the girls and actually from the guys too that were like, “My glutes hurt so bad, thank you so much!” It was awesome to hear it and it honestly made me want to start doing these classes more. That’s my element. That’s what I like to do, I really enjoy it.