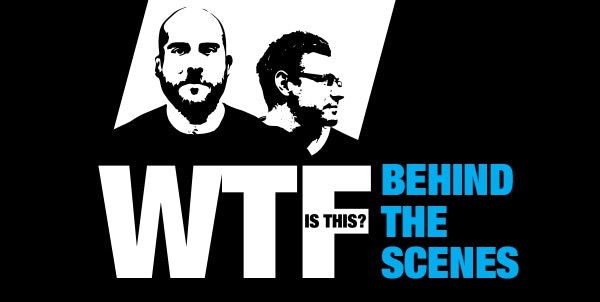 So you’ve seen the “WTF is This?” videos, but who are these guys? Why are we featuring them in our videos? Today we’re going to give you a bit of background info on our customer service reps and how they became the stars of your favorite series.

DT is originally from Ft. Lauderdale. His fitness journey began in high school, where he played football. When he graduated in 2008, he was overweight and didn’t like the person he saw staring back at him in the mirror. He decided to make a change.

On his journey from “fat to fit,” as he called it, he found every resource he could to learn his body and all the ways he could change it – YouTube videos, nutrition articles, training programs, etc. I looked at bodybuilders like Jay Cutler and wanted to be just as big and ripped.

DT started bodybuilding when he was 22. He competed in his last show when he was 24 (4 years ago), but now he’s finally ready to get back into it. His next show, the NPC Southern States Championships is only a little over a month away. It’s one of the biggest in Florida, and has always been on his list of shows he’d like to compete in.

After his time away, he’s slowly gotten back into the sport of bodybuilding, but this show gives him the opportunity to get his name back out there. To help him get the outcome he wants, he hired Nick trigili as his trainer. Nick is an IFBB Pro bodybuilder and owns World Class Trainers. He’s one of the top up-and-coming trainers, and DT says he’s made huge improvements to his physique in as little as a few weeks.

When we asked what the hardest part of bodybuilding was for him, DT responded with “self-doubt.” He explains that he’s constantly wondering if he’s good enough. Despite the physical transformation from who he was as a kid, he’s still the same, insecure guy inside. And the easiest part? Eating, of course!

Sorry, ladies, this guy is off limits. DT has been with his girlfriend, Adriana for one year. The two met on Bumble, where DT was originally attracted to the fact that Adriana was a massage therapist. As a bodybuilder, your muscles and joints are constantly out of whack, so selfishly, he thought having a girlfriend around to help him work through those issues would be great! Luckily, it turns out she had a lot more going for her, too.

Today, the two love birds live together with their two dogs, Xena and Loki. Xena was rescued from the Humane Society after DT and Adriana watched The Jungle Book and couldn’t help fawning over the wolf puppies (no… really). Originally a bait dog, Xena was very timid and scared at first. To help her feel more at home, DT and Adriana decided to adopt another dog to be her friend.

Enter Loki. When they picked him out at the shelter, the 8-week old puppy had earned the name Mr. Grumpy. It didn’t take too long to turn his frown upside down though. Now, the two dogs are besties and round out DT and Adriana’s small little family.

DT has worked at BPI for four years now. He originally started in domestic sales, moved over to international sales, then outside sales, and now works as a customer service rep. He had always wanted to work in sports nutrition, so he turned his relationships with several staff members into his first job at the company.

Now, he enjoys working in customer service because it allows him to help people. He likes offering advice on the right products and solving people’s problems. He also likes knowing that he’s helping BPI become the “best supplement company in the industry.”

And then of course, there’s Mark, who he loves working with. According to DT, they have a very “good cop/bad cop dynamic. He’s very PC and I’m not.” I think it’s fair to say that this is what comes through in the “WTF is This?” videos as well. So what you’re seeing really is what you get with these guys.

Mark actually has a very similar back story to DT. He first started working out in high school because he was overweight. He started running on the treadmill and lost 30 lbs.! His success inspired him to get involved with MMA, which he did for 4 years. He even went to Thailand for six weeks to train. However, his trip there was the beginning of the end.

In Thailand, he found that everyone who practiced martial arts had more respect for form and skill vs. the focus on violence and hurting someone here in the states. When he came back to U.S., he was turned off by the whole approach to MMA; but he still wanted a focus for his workouts. So he turned to bodybuilding.

After about two years, he started doing StrongMan. He liked that it was measurable, not subjective like bodybuilding. Honestly, he also liked the ego boost of being able to pick up a massive rock and carry it across the room. However, his StrongMan days only lasted for about 6 months. His coach at the time was also a CrossFit coach, so it wasn’t long before he convinced Mark to try it.

He started doing CrossFit, and worked his way up to competitions, which he stuck with for about three years. Like StrongMan, he liked that it was measurable, that it was always competitive, and that he always had a challenge to work towards.

From there, Mark started doing Olympic Weightlifting. For about a year, it overlapped with his CrossFit training, but for the past three years, he’s been exclusive. He likes that the sport requires so much precision and attention to detail. One wrong move and the lift is wrong. He admits he has some OCD tendencies so this precision helps him keep them in check.

Mark has come a long way since his high school days. But the biggest change? His mentality.

“I used to work out just to lose weight. Now it’s about challenging myself and learning how I can continue to improve.”

Mark started in the fitness industry as a manager at GNC. There, he met a BPI sales rep and the two became fast friends. He was soon recruited as an outside sales guy in St. Louis. Next, he moved to Chicago as the Midwest Sales Rep, and about a year ago, moved to FL to work at BPI’s headquarters.

As a customer service rep, he enjoys the fact that he has more interaction with customers. It’s more hands on and he no longer has to work out of his car! Plus, he gets to help with the “WTF is This?” videos.

Compared to the rest of the content put out by the fitness industry, Mark appreciates that the videos are different. He and DT get to be themselves and help simplify the complicated supplement industry for the everyday person.

“When I first started, I didn’t know half the stuff I know now,” he says. “So I can relate.”

As DT said, Mark likes working with his partner in crime because they’re polar opposites.

“He’s act first, think later and I’m a planner; very by the book. It’s perfect because we balance each other out. My way isn’t always the best way and working with DT has helped me learn that.”

You guessed it: Mark has been spoken for as well.

Mark’s girlfriend, Anna, is from Ukraine. They’ve been together for year and a half now, and bond over their mutual love for fitness. She also competes, but as a bodybuilder (figure) and a power lifter. She loves to bake – particularly when it comes to adding protein to anything and everything. Mark says it makes bulking fun, but don’t get the wrong idea. Anna only uses clean ingredients. Prep can be a stressful time, so baking helps her relax.

Anna has a 9-year-old daughter, Nicole, and the couple is also raising two rescue pitbulls, Akuma and Piglet.